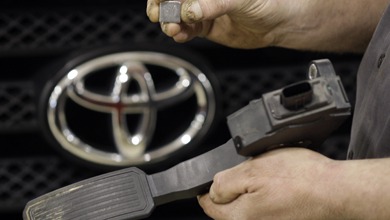 The law firm that helped pry a $4.9 billion settlement out of Merck over its Vioxx painkiller and an Ohio lawyer best known for suing over airplane disasters and silicone breast implants have filed would-be class-actions against Toyota, upping the stakes facing the Japanese automaker over allegedly sticky gas pedals.

The Alabama law firm of Beasley Allen, infamous among corporate lawyers for dragging their clients into plaintiff-friendly courts in the South, announced it sued Toyota in Florida for breach of warranty, fraudulent concealment and other claims related to Toyota’s alleged failure to disclose problems with sudden acceleration.

At least nine other cases have been filed against the automaker since reports emerged this fall of cars accelerating suddenly, possibly due to sticky gas pedals.

Toyota announced a recall of 2.3 million vehicles in January and later ceased sales of eight of its most popular models including the Camry while it worked on a fix. The company maintains the problem is limited to a gas pedal mechanism that on rare occasions may stick or return to position slowly.

The lawyers suing Toyota claim there’s much more to the story. The first proposed class action over gas pedals hit a federal court in Los Angeles in November. The lawyer on that case, Richard McCune, said on Thursday that he’s asking the judge to issue an injunction requiring Toyota to extend its recall to electronic throttle controls. Toyota denies the devices are an issue.

McCune acknowledged the entrance of class-action heavyweights into a field he once had to himself but said his case is further along.

“We filed when we learned what was going on and we had clients who said there’s a problem,” said McCune, who is still waiting for the judge to determine whether his case can be certified as a class action on behalf of all affected Toyota owners. “We initiated this and we’ve been in Toyota product litigation for 15 years.”

McCune said he thinks Toyota needs to end the problem once and for all by installing a device that returns the engine to idle when the gas pedal and brake are pressed simultaneously. Toyota announced plans to install the devices on some models last year.

Audi did so much earlier, McCune said, after it was hit with a spate of acceleration-related cases. Subsequent investigations showed most of them involved people depressing the wrong pedal.